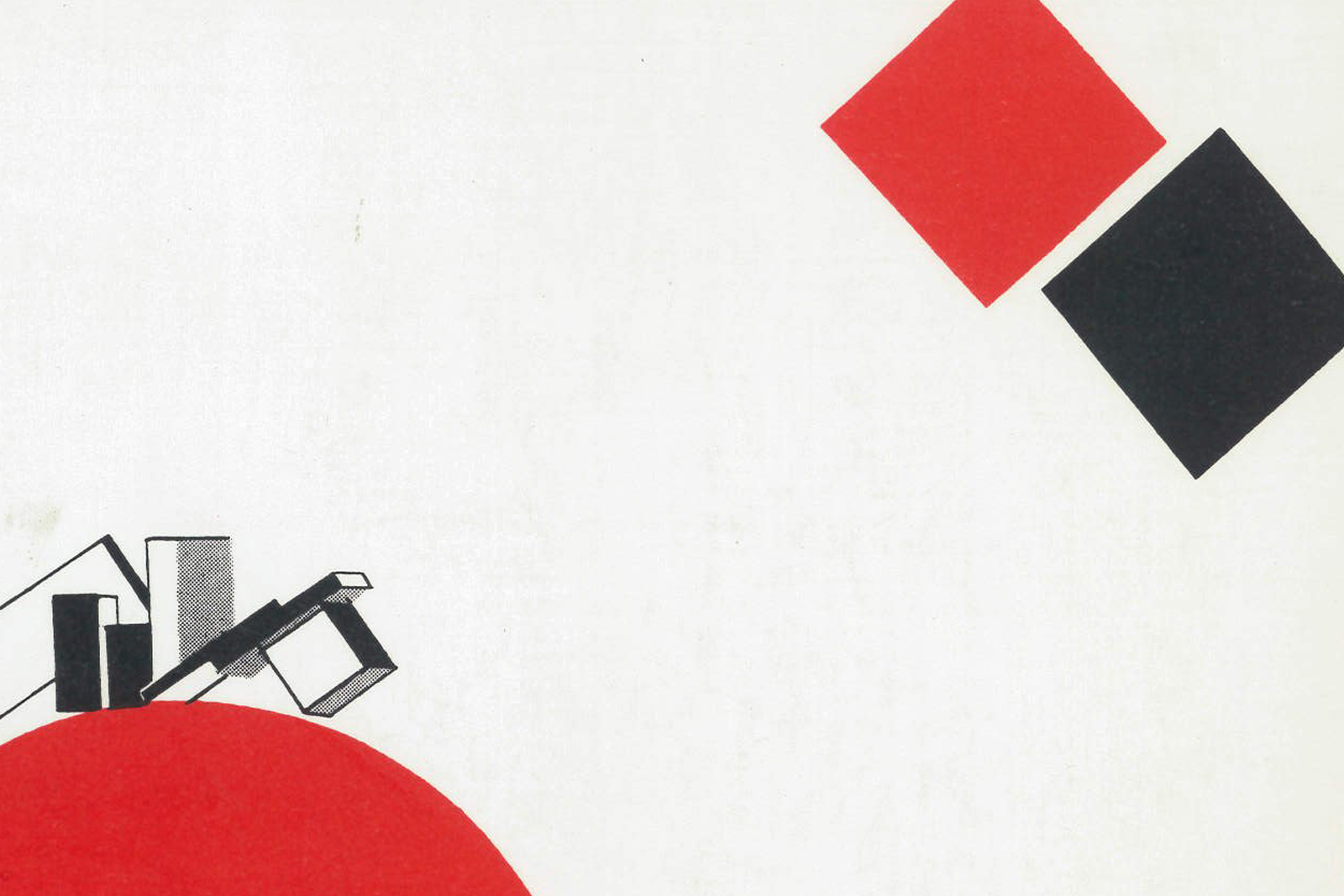 Sometimes it happens to us that, in some of the prints of our vegan bags, once finished, there is something familiar. We try to remember and… yes! The lines or the compositions remind us of certain artists we like. You may wonder which of those creators slip into our images as if by accident. If you like, today we’re going to talk about three of them: Malevich, Rodchenko and Lissitzky. Will you join us?

When someone starts a creative task, even though it may seem so, he never starts from scratch because we all -we, but also you- receive many influences. In our case, when we print a dau al deu fabric we are influenced by many things, such as forms from nature or others created by human hands. Among the latter, of course, the work of many artists. We have previously cited as examples three of them who shone in the young Soviet Union and who we like above all for their use of geometric forms, color and their way of composing images.

One of the most famous paintings by Kazimir Malevich (1879-1935) represents a black square on a white background and is entitled… Black Square. We agree, you can’t say that the title is a prodigy of imagination, but Malevich didn’t want it to evoke anything other than geometric form either.

In fact, the title of this work, from 1915, was already a declaration of intent. Malevich proposed that the plastic arts should break with all the previous ways of art and start from scratch. His paintings were not intended to represent any other reality beyond certain basic forms, a square, a cross or a circle. He called this extreme abstraction suprematism.

“After all, it’s only a square”, some will probably say today when looking at that work. However at the time it caused an earthquake that went beyond painting. Malevich, in fact, proposed the creation of a new language that would serve to interpret the new world that was born out of the disaster of World War I and the Soviet Revolution of 1917.

In the new USSR, art was a medium in the service of the revolution. A new society needed new forms of expression that would break with the realistic aesthetic that was bourgeois. Malevich took an active part in the new regime’s art policy, but despite the earthquake it had caused, the regime needed something else.

What the Bolsheviks needed was a way to convey their message to the masses and yes, the supremacy of Malevich and others like him was new and revolutionary, but not affordable enough for the common people. Out of this came constructivism, which would become the official artistic current in the early years of the socialist era. As the regime’s leaders would say artists would be “the engineers of the soul”.

The revolution transformed many things. However, it did not succeed in putting an end to something as human as envy or acid criticism. When Malevich saw an exhibition by Aleksandr Rodchenko (1891-1956), he referred to his style, in a derogatory way, as the art of construction, and, unwittingly, gave its name to one of the most important artistic trends of the first half of the 20th century. Rodchenko, in fact, liked Malevich’s use of basic geometric forms, color and minimalism. But, in a manner of speaking, he took it down off the pedestal.

When we print a fabric for our vegan bags many influences emerge; some come from artists like Malevich, Rodchenko or Lissitzky

This was the real point of rupture between both tendencies, because while for the suprematists the work had a value in itself, for the constructivists, even starting from a similar idea, their works had to serve a political objective. That is why Rodchenko, without giving up his taste for geometric forms, sweetened the extreme abstraction of other artists.

But first he had to finish off the work of Malevich and others, and end the painting era. Of course, if there was one thing those artists did not lack, it was ambition. In 1921, following the most supreme line of abstraction, he exhibited three canvases: one simply red, one yellow and one black. “I reduced the painting to its logical conclusion (…) I said: ‘It’s all over’“, Rodchenko told years later. Painting, he believed, should no longer serve to represent anything, but to communicate reality. Socialist reality, of course.

From that moment on, he turned to other forms of expression and went into graphic design, poster design, propaganda and photography, always at the service of the revolutionary objective. Some of his works are iconic and have exerted a great influence in later decades and even today.

Among them, you may be familiar with the poster in which Lilia Brik, muse of the Russian avant-garde -and according to some NKVD agent, the forerunner of the KGB- calls out to society with a powerful cry “Books!”. It is, in fact, an icon of the moment. There, the two flat colors of the revolution -red and black- and the geometric forms stand out. A symbol of a creative explosion that, once again, came to a halt with the reorientation imposed by the Soviet regime in the late 1920s.

Lissitzky (1890-1941), the third of the authors we spoke about at the beginning, was a revolutionary artist in the literal sense. Like others, he put his creativity at the service of the new regime. He believed that the artist was an agent of change. Like Malevich, he came into contact with the German Bauhaus, which he influenced and from which he also drew influences. And, like Rodchenko, his work covers fields as diverse as painting, architecture, graphic design and poster design.

He was interested in uniting painting and architecture, an interest that crystallized into what was called proun, works in which geometry and spatial effects were the protagonists. For Lissitzky, his works were, “a station on the road to the construction of a new configuration that emerges from a land fertilized by the corpses of the paintings and their artists”.

“What was new” was, of course, the nascent Soviet society, and “the corpses of the paintings and their artists” were the pre-revolutionary works but also the old social scheme. That revolutionary effervescence, however, had an expiration date. Between the late 1920s and early 1930s the Soviet state consolidated its power. Therefore, there was no longer any need to challenge the established order, because it was already the socialist order. And no authoritarian state like to live with what kind of challenges.

Lissitzky and many others adapted by force. Some succeeded, others faced censorship, and many did not make their way in this new world. Stalinism, which crushed many of those who had opened the way to the new era like a bulldozer, conditioned, at best, many of them, and condemned, at worst, many others. Government threatened Malevich, for example, with the death penalty in the early 1930s and spent a few months in prison. As for Lissitzky, it is not clear to what extent he collaborated with the regime, but upon his death, his wife and children ended up in Siberia.

What would those artists have done with the Internet, and how would it have influenced their work and their ambitions? For us, today, the web allows to enjoy the painting of these and many other artists. That is why we invite you to take advantage of it and see the work of Malevich, Rodchenko and Lissitzky. And we hope you like it as much as we do.